The original Jindera Golf Club was formed in the mid 1940’s. The course was around the footy ground, and consisted up 16 players. They  played inter club events against Burrumbuttock and Howlong clubs,  until the early 50’s.

After a 30 year break, in 1984, a few golfers formed a committee to reform the Jindera Country Golf Club. Through the Hume Shire, the new club leased the Government Common, situated between Drumwood Road & Table Top Rd. Over 14mths, the foundation members designed the new 9 hole sand green course, and started playing competition golf in 1986.

The original “club house” was a large tent(donated by Doug Dyde) erected on the hill site along Drumwood Rd. In 1988 work commenced to build  a shed, which was all done by voluntary labour. A wood heater, commonly know as the “Black Pig” was the feature attraction, with power supplied by a noisy generator.

In February 1994 the shed was enclosed, to form the present kitchen and clubhouse, with electricity, toilet block and outside covered area. The “Black Pig” was moved outside to this area, where it is is still used at present.

The front verandah was added a few years latter.

The sand greens were replaced with Synthetic greens in 2001. 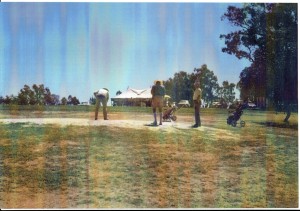